You are here: Home / Change Your Career Path / Maybe You Should Buy a Franchise Since You Hate Your Job 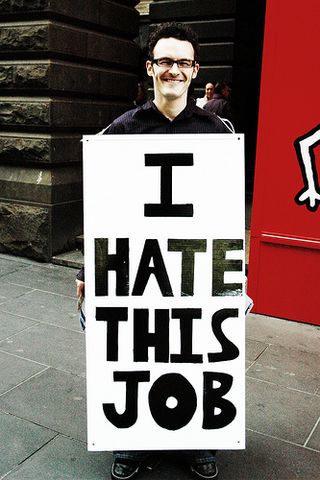 Lots of people hate their jobs. You?

If you do hate your job, what are you going to do about it? Do you have a plan?

Some people…when faced with a job they absolutely hate, get a new job. It’s something I did-more than once.

Others look at non-traditional career moves. They look into becoming consultants. They look at buying existing businesses. Some look at franchise ownership. It’s nice to have choices. Unless you don’t.

Your choices may be limited if you’re not in a position, financially, to go out and buy a franchise business. If I’m describing you, I know it sucks, but you do have a choice. You can continue putting aside money. You can get a little more aggressive with your investments. (Always check with a financial professional before you make any money moves.) But if you are in a comfortable enough position, financially, to at least consider becoming your own boss, franchise ownership could be your ticket out.

Maybe You Should Buy a Franchise Since You Hate Your Job

Maybe you should take a serious look into becoming a franchise owner.


Are you an executive who’s fed up with corporate politics? There are opportunities for you that you may not be aware of. Some franchise offerings specifically target folks with executive-level experience, but from the outside at least, don’t look like a business suited for executives.

Fact: Lots of really talented people miss out on opportunities in franchising because they “hear” things from others.

Please don’t discount franchising because of things you “hear.” We all hear things. Especially when we’re about to make a major purchase. Make a commitment to yourself to get the facts about franchising…or anything major you may be about to do-before you walk away from an opportunity.

Here are a few franchise facts:

More Facts And How To Get Them

A lot of people own franchise businesses they never thought they’d own. A lot of them are successful franchisees. They’re happy, too. Their “I hate my job” problems were solved. They got out.

But, does buying a franchise, instead of just going out and getting another job, really solve the “I really hate my job” issue with everybody who ends up doing it? Of course not. There are unhappy franchisees. There are people who have invested in franchises who went out of business. It happens. It sucks.

FYI: There are a couple of ways to increase your chances of success as the owner of a franchise.

After learning about franchising, you may decide that it’s not for you. That’s fine. owning a franchise is not for everybody.

But, if you hate your job do something about it.

Life’s too short to be miserable.

Please Share This Article!
7Shares
Note: When you buy through links on our site, we may earn an affiliate commission.