For years, people have been saying “You shouldn’t buy franchises because the franchise fees are too high.”

Unfortunately, these “people” don’t understand how franchising works. I do.

In this post, I’m going to tell you what franchise fees are, their average cost, what they’re used for, and why they shouldn’t play a huge part in your decision to buy a franchise. Let’s dig in.

What Is The Franchise Fee?

When you buy a franchise business, the first thing you write a check for is the franchise fee.

In a nutshell, it’s an upfront fee charged by franchisors that grants you a license to operate their business for a defined period of time. And once you pay it, you officially become a franchisee.

That means you’re permitted to represent their brand. Plus, you get to:

And a lot more.

How A Franchising Attorney Describes The Franchise Fee

*Per the Federal Trade Commission rule, the franchise fee needs to be at least $500.

That said, in all my years in franchising, I’ve never seen an initial franchise business fee that low.

How Much Are Franchise Fees?

Inflation. It affects everything. And that includes what franchisors pay to keep their infrastructure up and running.

The second reason franchise fees are getting higher?

Franchise brokers are getting paid higher commissions. But why? Are they doing more for franchisors? Heck no! I’ll get into that in a moment.

As to franchising fee cost, I’ve seen franchise fees of $100,000 or more. I know…that seems crazy. But here’s why they can be that high.

When someone becomes a Master Franchise holder, they purchase the rights to a large geographic area. That means the fee they pay is based on population.

Here’s an article about Master Franchises.

What Are Franchise Fees Used For?

Broadly speaking, they’re used by the franchisor for:

Here’s what they’re not used for.

That’s because franchisees pay a percentage of their revenue to the franchisor. Figure around 5%.

Just multiply that by 100 franchises, and you’ll see where franchisors make their real money.

“The Franchise Fees Are Too High”

Finally, remember I started this post off with a comment about why you may not want to buy a franchise “because the franchise fees are too high?”

So in this case, it’s not the franchise fees that are too high.

For some, it may be that the total investment is too high.

Rowley Mayo, a Mr. Appliance franchisee in Minnesota, said that “The $27,000 franchise fee was a bargain compared with the cost of buying the sophisticated technology needed to start an appliance-repair business from scratch. It would cost you a fortune to duplicate what you get in a box from Mr. Appliance“

Why Are Franchise Fees Getting Higher?

Most people looking to buy a franchise don’t realize this, but one of the major reasons franchise fees are going up in price is because of franchise brokerage groups. Let me explain.

New franchise concepts are entering the franchising space every month. And they need to sell franchises.

If they want these groups to sell franchises for them, they need to pony up 40-50% of the franchise fee. But that’s not all.

Some of the greedier franchise brokerage groups also demand thousands of dollars up front-just to join their group. It’s painful for these young franchisors, but some of them do it anyway. There’s more.

I’ve heard cases in which franchise sales companies have recommended that franchisor raise their franchise fees. Why?

So the salespeople working at these companies can get paid generous commissions. But there’s something else I’m hearing.

Some of these groups are telling franchisors to change how they award territories.

Specifically, they are encouraging franchisors to create more, smaller territories. Why?

So the franchise salespeople can sell more franchises, and in turn, make more commissions!

Now that doesn’t always help new franchisees, but it certainly helps the franchisor (kind of).

And it sure helps the franchise sales organizations!

Finally, as to why franchise fees are going up, a lot of it is because of franchise brokers and outside franchise sales organizations who want more money.

And it’s you, the franchisees, who are paying for it.

The best way to get the truth about any franchise opportunity you’re investigating is to talk to the franchisees.

After all, they’re the people who have already invested their money in the franchise and are operating the business you may want to own, too. And like you, they wondered about the initial fee, too.

So in addition to the questions you’ve written down to ask existing franchisees, make sure you ask them if the initial fee they paid to become a franchisee was worth the price of admission.

That way, you’ll be able to find out if the initial fee (and the ongoing costs) are worth the money.

I’ve included a HUGE list of questions you need to ask franchisees and the folks at franchise headquarters in my Franchise Research Guide. And more. Check it out here: 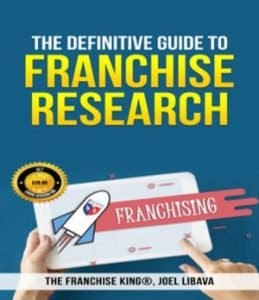 What if you were somehow able to pay a $30,000 franchise fee instead of the $40,000 fee listed in the FDD, and some of the existing franchisees found out? Do you think they’d be mad? I would. That’s why they’re not negotiable. However…

It’s a known fact that franchise fees can be discounted.

For example, some franchisors offer discounts to U.S. military veterans.

Another common thing is when you buy the rights to multiple franchise units upfront.

For example, if you were to buy one Great Clips franchise, your franchising fee is $35,000.

But if you commit to 5 franchise units, you’ll only pay a $20,000 fee for each one, because Great Clips discounts it because you’re committing to multiple units upfront.

Wrapping up, you’ve learned that initial franchise fees get the ball rolling for both franchisees and franchisors. And the good news is that you only pay them once.

When you buy the franchise you feel is the right one for you.

What is the franchise fee?

The franchise fee is a one-time upfront payment paid to the franchisor when a franchisee joins the system.

How much is the average franchise fee?

The average franchise fee hovers around $35,000.

What is the franchising fee for a Subway franchise

The franchising fee for one Subway franchise is $15,000.

What is the franchise fee for Chik fil A?

Please Share This Article!
7Shares
Note: When you buy through links on our site, we may earn an affiliate commission.