You are here: Home / Franchise Purchasing / Owning This Chicken Restaurant Franchise Practically Guarantees You A 1400% Annual Return On Your Money

Good news! It’s entirely possible to own a chicken franchise and get a 1400% return on your money. How? Keep reading. This isn’t fake.

But before I begin, I need to say something.

In view of the fact that all of us have been pounded over the head with non-stop misinformation for the last 5 years, I understand that it may be hard for you to believe anything at first glance. That includes earning a 1400% return on your investment by owning a chicken restaurant. I get it. But sooner or later you…me, all of us need to believe someone. Right?

With that in mind, I encourage you to have an open mind about the topic at hand.

There’s No Misinformation About Franchising Here

Now for those of you who either know me personally, have been absorbing the franchise information I’ve been providing for 20 years, and/or have worked with me either 1-on-1 or have participated with me in franchise/small business events I’ve been part of, you know I speak from the heart-and that the information I provide is fact-filled.

Phew! That was long.

And if you don’t know me well, and you’re not sure you should believe what I have to say, I invite you to read what others say about me.

Regardless, I assume you’re sufficiently ready to learn about a franchise business opportunity you can buy that has an almost guaranteed (and unheard of) 1400% ROI. Patience my friend.

Before I share the name of the chicken franchise, I’d like to tell you two things my dad told me.

I concede. I still think that way (as you’ll see when I share the name of the brand that has remarkable ROI numbers). Here’s the other thing my dad told me.

Hint…I don’t like the fast food company I’m about to tell you about.

This Is The Chicken Franchise Opportunity I’m Talking About

Are you ready to learn the name of a money-making fast food restaurant business-that even if malls started closing next week, you, as the franchisee operator, wouldn’t lose more than your original upfront investment?

It’s Chick fil A, and as I said, I don’t like the company.

To be blunt, I don’t like Chick fil A’s not at all low-key way they include their religious views in their business. They’re a bit outdated.

To be exact, I don’t like the fact that they refuse to embrace the 21st century and the changes taking place in real-time.

You want proof? Read what the Dan Cathy, the multi-millionaire CEO of Chick fil A said on a radio show.

On Chicken Franchises, Business, And Religion

During a conversation I was having with my brother-in-law about life, this post-as I was writing it, and business, he reminded me that “private businesses have a right to espouse their religious views if they want.” Mike’s right. They certainly do. It’s just that I think it’s a mistake to mix business and religion. For me, there’s no grey area. Either you keep your religious views to yourself, and you don’t shove them down the throats of your customers, or you don’t.

Would you like to know why I get aggravated when people vomit out their religious beliefs? Good!


Case in point: my past experiences with people who quote the Bible, whether it’s in a business-related article or comment, on Twitter, Facebook, or in person.

Almost without exception, when someone starts blabbering Bible quotes in rapid succession, the person doing the quoting turns out to be less than ethical.

Now, I don’t know about you, but on numerous occasions, both in business and everyday life, people have tried to impose their religion on me. To say I disliked it and was uncomfortable with it would be an understatement. Has that ever happened to you?

With that said, I can’t emphasize this enough.

I’m anti-dudes like this who suck the life out of people via their bank accounts, so they can live large.

What’s more, I’m anti-Bible “quote” when used as a major part of whatever it is someone is trying to communicate or accomplish.

Finally, as it relates to business, some of today’s business dealings can be complicated enough to begin with. Inserting your strongly held religious views into the mix is not a value add.

By now, you should know why I don’t (and won’t) eat Chick fil A food. Why I won’t spend my money with the chicken restaurant chain. Again, for me, there’s no grey area. But this isn’t about me.

Instead, it’s about you, and the almost guaranteed, ridiculously high return you can get if you “buy” a Chick fil A restaurant “franchise”* and become an owner operator.

Be that as it may, I know you’ve been waiting to hear about that 1400% return on both fried and non-fried chicken. So let’s do this!

Let’s start with this:

How much do a Chick fil A chicken franchises cost?

Believe it or not, the upfront cost for a Chick fil A restaurant franchise is only $10,000. What? I know…I know. You don’t believe me.

Check this out. It’s from the official Chick fil A corporate website:

See? But there’s more. And you won’t find the next sentence in their franchise documents.

You are not a franchisee.

You are an “operator.”

What does that mean, Franchise King?

Bluntly, it means that you don’t own sh*t. In other words, you don’t have equity in your the business.

In short, when you’re at the end of your Operator contract, you won’t have the ability to sell your store. That sucks.But there’s a bit of good news in the arrangement the Chick fil A legal team put together.

If the mall or shopping center where “your” chicken restaurant is located goes under, you’re only out $10,000. Why?

Because Chick Fil A corporate owns your business. All of it.

So how do you get paid?

You’re pay comes in the form of a percentage of the revenue. Estimates range from 5%-10%.

I think I know your next question.

Exactly how much does a Chick fil A operator make?

Keep reading. You’re not going to believe it.

How Much Does A Chick Fil A Owner Make? The Revenue Numbers Tell The Story

The numbers you’re about to see are off-the-charts.

From Jonathan Maze, the Editor-in-Chief of Restaurant Business:

Wait. It gets better.

“According to Chick-fil-A’s franchise disclosure document, however, its standalone, non-mall locations make a lot more than that, about $6.5 million on average.

Now remember, that 1400% return I referred to at the beginning of this absolute masterpiece of words, was based on an operator making $150,000 a year, minus her $10,000 investment. Back that number out, and her portion is based on her location doing $3,000,000 in revenue-and her getting 5%. But what if her share is more than 5%? Let’s go back to the example of a LARGE Chick fil A restaurant operation and see what happens.

Check Out This Return On Investment For A Chick fil A Owner (Operator)!

If you’re the operator of a $6.5 million Chick fil A restaurant (hold on-I’m calculating this now), all of a sudden the return on your original $10,000 investment is a gargantuan 3,150%!

The upshot of all this?

It’s pretty safe to assume that you’ll bring in a 6-figure income as a Chick fil A franchise operator.

Given these points, along with the reality and unpredictability of business, it’s important to know that you may not hit a 6-figure income in your first year, but you probably will in your second year as an operator.

You’ll Work Long Hours As A Chick fil A Operator

I never said getting a 1400+% return on your chicken franchise restaurant investment was going to be easy. And in the case of Chick fil A, the work is hard and the hours are long.

What…you think managing a crew of pimply-faced, hormonal teenagers in a chicken-joint is easy? You have no idea. Good thing you’re only open 6 days a week-not 7 days a week like your restaurant competitors.

Regardless, managing a fast-paced pretty much always busy fast-food franchise is stressful. There’s lots to do. And you’ll get hot standing over a fried chicken fryer. But the rewards?

Again, do you remember how much a Chick Fil A owner makes?

Considering the fact that the Chick fil A franchise fee is only $10,000, and you’re almost guaranteed to make over $100,000 a year as a Chick fil A operator, the rewards are pretty darn good.

Unless you want to own something.

And speaking of “owning” something, check this out.

Chicken Salad Chick: An Up And Coming Chicken Franchise 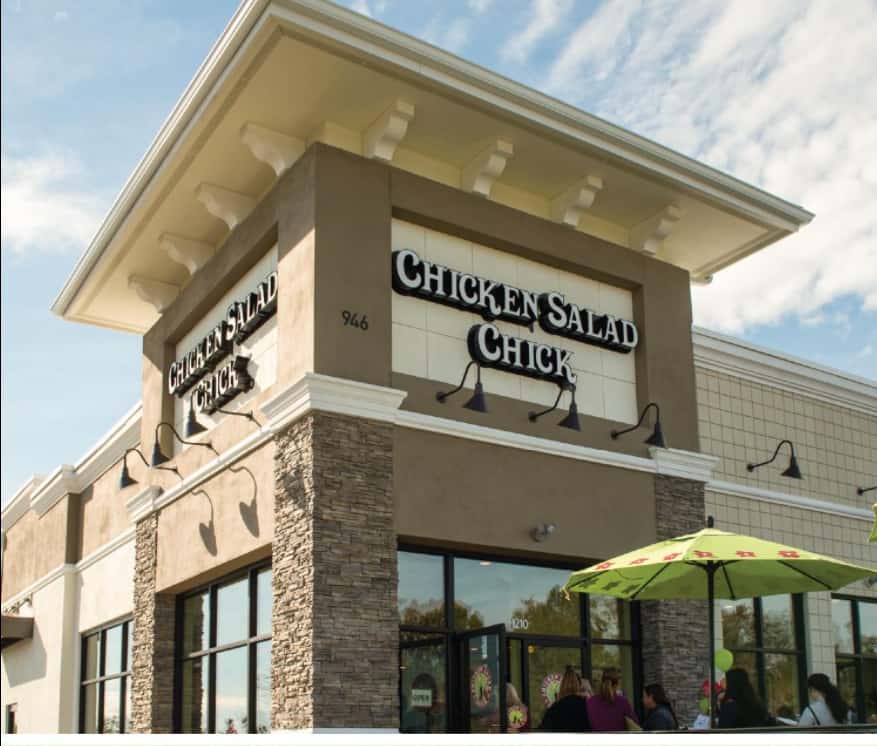 While an ROI of 1400% probably won’t happen, you still need to know about Stacy Brown’s Atlanta-based franchise, Chicken Salad Chick.

Because what started out as a small takeout restaurant in 2008, currently has 179 restaurants open across 17 states and plans to grow to more than 200 by the end of 2021.

As of now, the majority of Stacy’s Chicken Salad Chick franchise locations are located in the South. But that’s about to change, as they’re expanding their footprint to include the entire country.

With that in mind, if you’re thinking about getting into a food-service business you actually own, Stacy Brown’s Chicken Salad Chick franchise is worth a look.

Atlanta-based Chick fil A receives around 40,000 franchise applications a year. Based on that number, it would seem that your chances of being picked to operate one of their chicken restaurants are pretty low. Agreed?

To put it another way, you probably have a better chance of hitting a Progressive Jackpot in a Las Vegas casino than getting picked to be a Chick fil A operator. Of course you could get chosen. And my local Ferrari dealership could give me this.

To conclude, if you get picked to be an operator of a Chick fil A restaurant in your area, you should be able to bring in an excellent income.