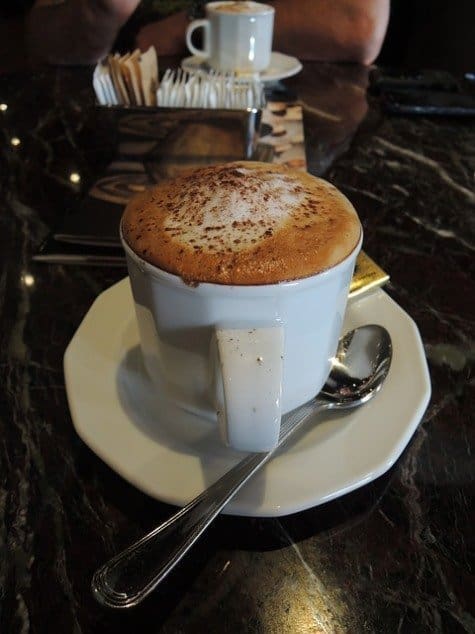 If you guessed freshly-brewed coffee…you’re wrong.

You need to really think about this. That’s because the correct answer holds the key to the kingdom.

Other things besides coffee. They sell the De’Longhi EC155 15 BAR Pump Espresso and Cappuccino Maker

They sell desserts. Coffee shops sell all sorts of things that relate to coffee or that go with coffee. But, they sell something else, too. They sell a feeling.

Memories are also created at coffee shops-coffee franchises. I have a good one myself.

I was in New York City last year…in October. I was asked to speak (For a 3rd time) at The New York Expo. I was also there for the 2012 Small Business Influencers Awards Ceremonies, because I was one of the judges.

Before the conference, I met my good friend, Andrei Neimanis, at one of the dozens of NYC Starbucks. We spend an hour together. We talked about each other’s lives…all the great stuff and not so great stuff that was happening. Andrei and I met when we were in high school; we were members of a youth group. He lived in Niagara Falls, NY, and I lived in Cleveland. Our youth group was a traveling one…all of the members lived in different parts of the country-in our case, the Northeast. So, we got to visit each other’s cities, and we all got to know each other well. Some of us have stayed in touch…like Andrei and me.

The hour that Andrei and I spent at Starbucks was fantastic. He was so happy.

Unfortunately, it was the last time I saw him. Andre passed away on July 24th of this year…suddenly. (Andrei and his kids)

I’ll always have that memory of our coffee meet-up. Andrei and I laughed like we used to laugh that morning…just like we did when we were a couple of wild and crazy teens.

I can still smell that Starbucks coffee shop. I still think of Andrei. He was a great guy. He loved his kids. He had been through a lot. He lost several friends on 911…they worked in The Towers like he had years before. He was seriously affected by it. His eyes held only some of the sadness he felt.

Anyway…what I’m getting at here is that coffee shops sell more than coffee. They sell an experience. They sell memories.

A lot of people meet for coffee. A lot of great conversations take place over coffee. Can you think of any that you’ve had? (Share them if you’d like in the comments)

Coffee Franchises: Should You Own One?

A coffee franchise is a food-service franchise. The hours are long. You’ll have more than a few employees. You’ll have pretty high expenses, since you’ll have to lease a retail space that’s in a good area of town. You’ll probably carry a sizable amount of inventory. Coffee is expensive, and the price fluctuates. But, it is a cool business.

Just remember if you buy a coffee franchise you’ll be selling a lot more than coffee. And, that’s the key to the coffee shop kingdom.