You are here: Home / before you sign it / You Can Return A Dog But You Can’t Return A Franchise
Follow @FranchiseKing I was so excited.

After all, it had been almost two full years since we had to put Winston, (our Airedale Terrier) down.

Winston was a cool dog. He loved our daughter, and he watched over her like only a best buddy could. He was a character…always testing us…always seeing what he could get away with.

In our family, I’m the animal lover. I’m the guy who DVR’s the cool animal shows that can be seen on Animal Planet and The National Geographic Channel. (Check your local listing for dates and times.)

I really love animals. They are so amazing.

I’ve always been fascinated with dogs. I think that K9 dogs are the bomb. Therapy dogs, too.

My wife is not a huge fan of animals. (I guess that she had several less-than positive experiences with dogs and cats as a child.) But, she was pretty cool when we purchased Winston for our daughter’s 7th birthday.

My daughter is kind of in the middle when it comes to animals, but she really loved Winston.

While I wasn’t ready for another dog right after we lost Winston, I did want to have another dog eventually.

It took some convincing, but last month I finally did it.

I convinced the girls to allow a new puppy into our home.

I was so excited. I was going to have a pal beside me every day as I worked to change the franchise world a day at a time from the confines of my home office.

A Bout of Gout

Life can be so darn humorous.

Now, I’m not going to get all religious on you, but I do believe in a Higher Power. And, I also believe that my Higher Power has a great sense of humor.

Why else would I contract a nasty bout of gout three days after picking up an 8 week-old puppy from this Ohio Airedale Terrier breeder.

And, in case you’re not familiar with gout, it’s a form of arthritis. No big deal, right?

My foot hurt so bad, I had to beg my doctor to call in a prescription at my drive-thru pharmacy without seeing me first, because I would have never been able to get from my car to his office for an appointment. (I’ve had gout in the past, so he knew my history.) 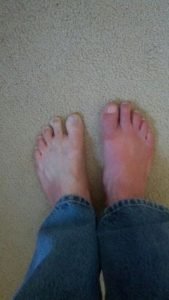 (Guess which foot has gout)

That’s where I must have been living.

Because if I was living in the real world, (the one that knows just how much time and effort 8 week-old puppies need) I may have never purchased Sammy the Airedale.

Admittedly, it was fun to check out the newest dog toys

, beds, and other assorted accessories on Amazon.

But, my visual of a puppy happily hanging out with me while I worked, was not one that was based in reality.

They also like to chew and nip and bite anything and everything.

But they mostly don’t sit still.

So, because of my attack of gout, I couldn’t really walk Sammy.

And, because of the pain, I couldn’t use my time-tested crutch. (My sense of humor.)

So, there I was, hopping around like a freaking idiot, chasing Sammy all over the house, trying to make sure he didn’t destroy anything of value during his almost constant energy spurts.

Did I mention our outdoor excursions?

The ones that I’m referring to consisted of walking on ice-laden Cleveland, Ohio sidewalks-with my #1 goal being to come back with no broken bones.

Happily, the gout went away.

But, then a nasty flu-like thingy paid The Franchise Kingdom a visit, adding yet another layer to a slowly evolving almost apocalyptic scenario.

It was a miserable time.

Our breeder was very understanding.

I told her that I bit off more that I could chew. (Wife and daughter agreed.)

I knew that my money would not be refunded, and I was pretty much okay with that.

Between the gout, and the nasty bug that my wife and I both caught within a day of each other, having this new puppy was too much for me.

I just couldn’t handle this puppy.

And, I admitted as much to myself.

I knew what the title of this post would be a few hours after I returned the dog.

Returning a dog is easy. It’s not very pleasant-it’s kind of emotional, but it can be done.

But, returning a franchise?

If you’ve been a loyal blog subscriber, or have read my articles on franchising over at SBA.Gov or Small Business Trends, or Franchisewire, you know how focused I am on making sure that you know all you can about yourself-and franchising, before you write The Check .

The information I provide is designed to help you lower your financial risk while at the same time increase your odds of success-real success, as a franchise business owner.

But, information alone won’t cut it.

Before we bought our puppy, I had information. I even had real-life experience.

I knew the breed of dog. I knew the pros and cons of dog ownership. I knew that puppies have a lot of energy and that they needed a ton of attention.

But, I didn’t dig deep enough. I stopped at the “excitement” part of the story that I was crafting in my mind…the fantasy, really.

I made a mistake. A big mistake.

But, I was able to return the dog.

You Can’t Return A Franchise

If you follow the steps I suggest-and have been suggesting for years, regarding how to choose, research, and buy a franchise, you will increase your odds of success. You will be able to lower your risk.

In a perfect world.

But, it’s an imperfect world, and buying a franchise is a lot bigger than buying a dog.

If you want to buy a franchise-and you really want to do it right, I’ll help you.

But, you have to be ready for business ownership.

Make sure that you’re really, really, ready for the type of commitment you’re about to make.

Because you can’t return a franchise.