You are here: Home / Franchise Terms / What Exactly Was Kroc Thinking? 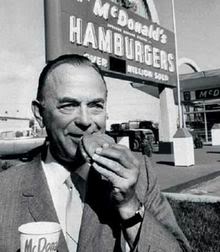 I would have really enjoyed a brief, yet fulfilling life as an insect in the 1950’s. I can easily imagine buzzing around from restaurant to restaurant, looking for gourmet feasts of the six-legged kind. Since I’m already fantasizing, I may as well go all in, and imagine myself as The Fly on The Wall at a certain California hamburger restaurant owned by the McDonald brothers.


When Ray Kroc stopped at the McDonald brothers place of business to sell Prince Castle Multi-Mixers, I wonder how fast Mr.Kroc’s wheels started turning when he witnessed the amazing assembly-line style food preparations that were taking place in their busy kitchen.

As a fly, I may have been a little too focused on the leftover scraps that were being created in that glorious kitchen, but what if I would have stopped eating for a few minutes, and actually listened to their history-making conversations that took place almost 60 years ago? They must have been amazing.

According to Anish Chandy, when Ray Kroc was fifteen, he lied about his age and landed himself the job of an ambulance driver for the Red Cross. After that he tried his hand at a myriad of things, finally settling down to be a salesman. He initially sold paper cups, but opportunity knocked on his door when he had a chance meeting with Earl Prince, the inventor of the five-spindle multimixer. Kroc convinced Earl to give him exclusive marketing rights for the mixture and successfully sold it all over the country for the next decade and a half. Read more about Kroc at Buzzle.com

Another, “salesman,” trying to dominate the world. Can you name some others?

So, what was Ray Kroc thinking? Was his vision of having his restaurants dotting the landscape of just about every freeway exit ramp neighborhood immediate? Was he truly a visionary? And, how much trial and error did he do before he felt that his hamburger restaurants were up to snuff? And, would he be out of his mind angry if he was able to read this recent review of the McDonald’s Double Drive-Thru experiment?

And, if I was The Fly on The Wall during some of the conversations he was having with the brothers, would I have sensed that he was truly an amazing man?

I know one thing I would have seen; one of the best salesmen to ever walk the earth. And, one heck of an entrepreneur.
Perfection is very difficult to achieve, and perfection was what I wanted in McDonald’s. Everything else was secondary for me.” – Ray Kroc
Did you ever get to meet Ray Kroc? if so, what was he like? I’d love to know.