You are here: Home / franchise advantages / How McDonald’s is McScrewing Their Franchise Up
Follow @FranchiseKing 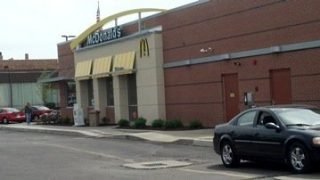 Do you remember when you could drive up to your nearest McDonald’s franchise, order your food, and get in and out in less than 5 minutes? I do; it was last century…

Something that used to be really important at McDonald’s all of a sudden isn’t; convenience.

If the suits at corporate headquarters don’t get it together, and soon, their customer base will start spending their money elsewhere. From what I’ve seen first-hand, elsewhere is Burger King.  I’ll explain…

From Fast Food To Slow Food

I consider the McDonald’s franchise system to be world-class. I’ve written plenty about this top franchise over the years, and I watch what they do like a hawk. They are the most important franchise in the industry. But, their corporate team isn’t paying attention, and that troubles me. And considering that they’ve experienced over 100 months of consecutive positive global same-store sales growth, maybe they don’t feel that they have to. Plus, there’s a major transition taking place internally, and the team could be focusing on their own futures.

That’s because a new CEO is jumping on board in July.

One of the first things he needs to do is become a secret shopper. He needs to travel around the US-by car, and pay a visit to at least a dozen McDonald’s franchises-preferably the newer ones. He needs to order his lunch or dinner from his car in those new, cutting-edge Double Drive-Thrus. Then, Don Thompson-the new CEO, will understand what I’m getting at.

It’s frustratingly slow, customers are confused as to who should proceed to the cashier’s window, and the employees aren’t being trained correctly. Other than that, I’m a very happy McDonald’s customer.

Just shrink it down. Look; 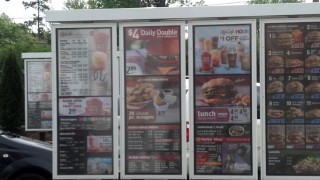 I snapped that picture at the new McDonald’s restaurant that just opened less than a mile from The Castle. What do you see?

I’ll tell you what I see; too many choices! No wonder cars and trucks are backed up 8 deep x 2, (Double Drive-Thru) at lunch and dinner. (Breakfast, too?) I’m no mathematician, but looking at that menu board, I’d guess that there are around 250 possible variations in the way that customers can order. That slows things up a bit, especially with poorly-trained staffs. Now, I’m not saying that every McDonald’s franchise that’s been equipped with the Double Drive-Thru is a disorganized mess. I can only go with what I know from the two that are open and operating in my local area. It’s really disappointing. Especially for someone who’s constantly extolling the virtues of the McDonald’s franchise model.

McDonald’s stock price could rise if corporate uses this suggestion;

If franchisees are going to the trouble, (and the expense) to build Double Drive-Thrus, why not just go for it, and have them build another set of drive-thru windows? (One with a cashier, and one with order fulfillment.) The lines would certainly move a lot faster, revenue would go up, and the slimmed down menu board would give customers less choices. (Giving customers less choices isn’t necessarily bad.) You’re supposed to be a hamburger restaurant. Serve hamburgers! (And a few chicken selections, a salad or two, and some fancy profitable coffee.)

Retool your training program. Your employees are (in general) not making you look good! I’m not sure what’s missing, but it sure seems like they don’t know what they’re doing. Slow service and mistake-prone orders are a deadly combination. Eventually, some customers will go elsewhere. Like Burger King.

I buy fast food at least once a week. And, I’m not always going to McDonald’s. Sometimes, I’m just not into waiting. And waiting…

So, I go to Burger King, instead. I go there because I can get my hot food in 2 minutes. Two. Not only that, the employees there are pumped. They are all smiles, and have tons of energy. It’s like they live to provide super-fast service. There is a team feel to the operation.

Now, they do make mistakes, and I have had orders come out wrong, once in awhile. But, somehow I don’t mind as much there. Interesting.

I don’t think that Burger King will surpass McDonald’s, franchise unit-wise, anytime soon. And, I’m not sure if most Burger King franchises are managed the same way as the one that’s by The Castle. (Maybe you can let me know how you feel about the Burger King near you, service-wise.)

But, they’re onto something.

Now, if only the french fries at Burger King were as good as the ones at McDonald’s….