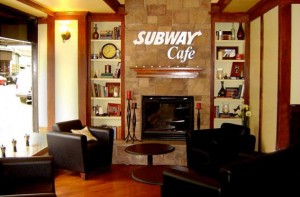 (A warm and inviting interior)

Several Subway® locations are involved in the test-marketing of a new-and very classy-looking, franchise concept.


The Subway® brand is a powerful one. And, while I don’t always agree on it’s almost always being ranked as a top franchise in the numerous franchise ranking articles that can be easily found in several print and online publications, it is a solid franchise business concept.

A Subway® Cafe franchise business features an expanded breakfast menu that includes, cinnamon rolls, croissant sandwiches, and muffins. The new items listed are in addition to the new breakfast offerings added on last year by Subway® corporate. In addition, fancy coffees and espresso are offered.

There’s a great post on Nation’s Restaurant News about a San Diego Subway® Cafe, that’s worth a read.

Why are Subway Franchises so Darn Popular?

Is it Time to Buy a Subway Franchise?

Learn How to Buy a Franchise

Do you know any women who are thinking of buying a franchise this year?

I’ll be announcing a Franchise Contest just for women, soon.

If you subscribe to blog updates, you won’t miss the contest announcement…

Wait! Please Share This Before You Go!
1Shares
Note: When you buy through links on our site, we may earn an affiliate commission.