You became a franchise owner because you wanted more control over things. You wanted to have more of a say in your future. You were sick of getting downsized. Making others wealthy was getting old. Working 65 hours a week for a company that would replace you without blinking an eye, didn’t sit very well with you.

So you became your own boss. Now you’re the master of your own destiny.

Franchising was very appealing to you, for several reasons.

It’s great to own what you do. Being the owner of a business can be an amazing experience. It’s powerful stuff.

One great thing about a franchise business is your ability to gather crucial information about the specific one you’re thinking of buying — well before you actually write the check. If you learn how to do great franchise research, you’ll be in an excellent position; you’ll be able make an intelligent, fact-based decision on whether or not to move forward with the one you’re enamored with. 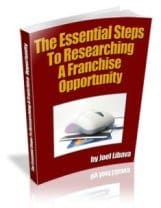 When you’re part of a franchise system, there are lots of things that are controlled for you. You don’t have to worry about the correct colors and fonts to use in your company logo. You don’t have to worry about choosing the correct computer system for your business. If you’re the owner of a food franchise, you don’t have to invent new dishes, or constantly change your menu. You can concentrate on doing business. That’s pretty attractive to lots of would-be business owners. And lots of them are on the firing line with you, in the same franchise system, in other areas of the country. (Sometimes in the same city you’re in.) Hopefully, you had a chance to meet a few of the franchisees when you were doing your research.

When you’re the owner of a food franchise, you’re in control of your own real estate; your sit-down restaurant…your take-out pizza shop. But, you can’t control the others…the individual shops that you don’t run.

For instance, if you’re a franchisee of Papa John’s, and you don’t own the franchise in New York City that printed out this receipt… 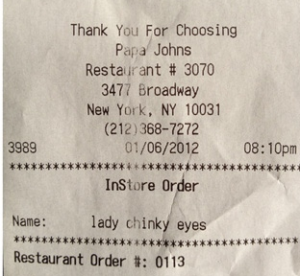 Did you see it? Lots of people on Twitter did.

The New York Daily News reported that a Papa John’s customer by the name of Minhee Cho found out that she had been described by a Papa John’s employee as “lady chinky eyes,” on the pizza order ticket at the restaurant. Read The NY Daily News story  Not good. And, not nice.

If you’re a franchisee of Papa John’s, (even if you’re located 1,000 miles from NYC) your shop is going to feel the effects of this story. Word gets around fast, especially on Twitter.

I don’t think that Papa John’s franchisees are in any danger of going out of business because of this distasteful act. But, it’s a cautionary tale for anyone that’s thinking of buying a franchise. The lesson;

You can’t control the brand.