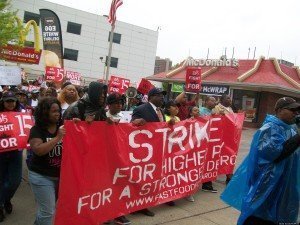 Fast Food Forward is (once again) sending a message to fast food franchise owners all over the USA.

Fast food workers need to be paid more. But, will they be?

The Fast Food Forward movement organized a fast food strike in NYC a while back which managed to create a lot of buzz. This strike should be no different.

Organizers are pushing for fast food restaurant owners to raise workers hourly wages from $7.25 (the current minimum wage) to $15.00.

National Restaurant Association officials refer to the fast food worker strikes as publicity stunts. They’re warning that increasing pay to $15 an hour would cause restaurants to rely more on automation and hire fewer workers. Read more on the New York Times website.

Backers of the movement point to studies saying that the average age of fast-food workers is 29 and that more than one-fourth are parents raising children.

I know you’ll be surprised to learn that our currently dysfunctional political system is smack dab in the middle of this proposed wage hike.

Senate Majority Leader Harry Reid, D-Nev., has promised a vote on a minimum wage hike by the end of the year. But, as usual, Republican leaders in the House of Representatives are hell-bent on opposing any such raise in the minimum hourly wage.

I was interviewed by a reporter from KIRO-TV, a CBS affiliate in Seattle. They have a candidate in the area who ran on a promise of raising the minimum wage to $15.00 an hour which has angered a lot of business owners.

A Report On Fast Food Wages

A fact-filled report on the issue of low wages in fast food establishments has just been published.

The Public cost of low-wage Jobs

The report, sponsored by the University of California, Berkeley, Center for Labor Research and Education and the University of Illinois at Urbana-Champaign Department of Urban & Regional Planning, is an interesting read.

The report is a real eye-opener. Read it here.

Being A Fast Food Franchise Owner

You shouldn’t. Fast food franchising has created a lot of wealth over the years. There are lots of opportunities for people who can invest a lot of money, and who want to grow something big. And, there are new things on the horizon that can help lower franchise start-up costs for fast food franchise owners.

Some fast food franchise owners are starting to feel the heat from all that’s going-on wage-wise. But, they shouldn’t freak out. Things have a way of working themselves out.

Will Fast Food Workers Get $15 An Hour?

I wonder if fast food franchise owners will end up paying their workers more.

Do you think they will?

Better yet, do you think fast food workers should be making $15.00 an hour?