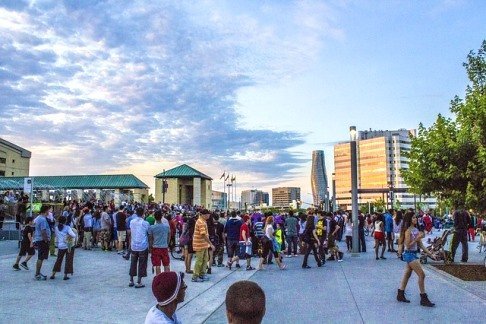 Nothing pleases the owner of a franchise more than having warm bodies…and lots of them, in his or her franchise business. Nothing.

That’s because without those warm bodies…without foot traffic coming in and out of the franchisees’ location:

Think about it. When you’re out and about, if you had the choice of stopping in a store that was busy…like an Apple retail store for example, which is not a franchise operation by the way, or a store that had 1-2 people in it, which one would you enter?

Let’s say that you’re travelling with your family-you’re on vacation. Everyone in the car is getting hungry, and you’re driving through some medium-sized towns. Do you:

I’d guess that unless your family members were starting to get light-headed because they’re so hungry, you’d try to find a parking space in the parking lot of the busy restaurant. It’s human nature.

My dad taught me a cool trick he used when he was out of town on business-which was a lot. He said to not only to look for a restaurant in an unfamiliar town that was busy, but to scope out the cars that were in the parking lot of the busy restaurant. If the parking lot had a good amount of nice cars with local license plates, he felt that it was a good bet that the restaurant was good. To him it was a positive sign because upper-class local residents were spending their money there. Try it; it works.

One thing you can do that works…no matter what your retail or food-service business sells-is to offer free seminars.

Customers love free things. Customers also like getting educated, because it makes them feel better about their purchases.

Offering a free seminar…heck, you can call it a workshop, is one way to get people in your door.

Recently, I wrote an entire article on getting foot traffic into a retail location for Small Business Trends. In it I offered a few other foot-traffic generating ideas to help your franchise business succeed.