You are here: Home / Franchise Education / How to Change The (Franchise) World; All Franchise Executives Need to Do This!
Follow @FranchiseKing If you’ve followed this blog for awhile, you know that most of my writing is centered around providing franchise tips and franchise business information for would-be franchise owners. That’s where most of my energy is focused, which is why the words flew out at a pretty fast pace for this.

I also write posts here, (and several other places) that are geared towards the franchise community. I don’t put together 500 word posts for franchise executives and franchisors to read because I can’t think of anything else to write about. I write franchisor-focused posts to Change The Franchise World, including this one written especially for new franchisors.

Take a trip to Disney World and Universal Studios Orlando.

I just came back from a family vacation in Florida. Part of our trip included relaxation mode; part included 2 days in Orlando. Let me tell you about Orlando…

Out first Orlando stop was Epcot® at Disney World®. 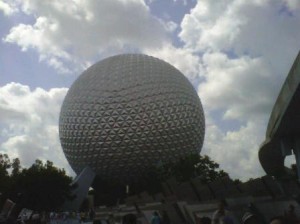 Now, I’ve been to Disney World® before, so I kind of knew what to expect, service-wise.  Coming from one who’s not too easily impressed, I was impressed 7 years ago when we visited Disney World®, and I was thoroughly impressed this time around.  My early background in the food and hotel industry gives me a leg up; I know what to look for, and I’m able to size an organization up pretty fast. Disney is a 1st class organization, and they have extremely high standards. For everything.

Epcot® was spotless; no litter. Nothing was out of place. Employees were everywhere. There were signs everywhere pointing the way to anything and everything we needed. It’s almost impossible to get lost at Epcot®, even as large as it is. We had a great experience. The folks at Disney don’t miss a thing. The price of admission, ($85) is steep, but we all felt that we got out money’s worth. (There were 8 of us; 4 adults, 2 kids and 2 teenagers.)

The following day was Harry Potter Day.  We went to Universal Studios Orlando because they had a new exhibit erected called “The Wizarding World of Harry Potter.” 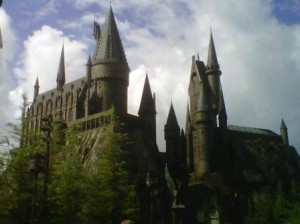 My niece, (Carrie) is a huge Harry Potter fan, and her expectations were, well…huge.

Now, since I’m quite knowledgeable about things that have to do with Royalty…like castles for instance, out entire party waited with baited breath to see my personal reaction to viewing Universal Studio’s version of Hogwarts™ castle as we walked in. I was in awe; it’s an amazing reproduction, and it’s huge!

Unfortunately, everything went downhill after the castle view.

Universal Studios Orlando is not Disney World. It’s not even close.

Signage is pretty much non-existent. One could get lost there. We were constantly searching for the next attractions. The wait times for the rides were clearly posted, but it was hard to figure out where to enter, at times.

Employee-wise, Universal runs with a lot less than Disney does, and it’s painfully obvious. Not only that, but several of them seemed unmotivated. I didn’t feel “special,” like at the other park.  And, it was $90 to get in. To one area. It was something like $130 to gain access to both areas at Universal. (Impossible to do in only one day.)

The experience that sticks out in our minds has to do with the big ride that’s inside the castle. First off, the line starts so far back, it’s dizzying. There were no signs, either. We just kind of figured it out. Once we got closer to the castle, the line split into 2. We didn’t know why until an employee tried to explain that one line was for folks that just wanted to “tour” the castle, and the other one was for folks that wanted to ride the ride. (I”ll bet that some folks behind us wanted to know this a tad earlier. But, no signs saying that.)

We waited over 90 minutes for a 4 minute ride. It was hell. Not only was it 94 degrees, with no breeze, but just when we thought you got close to the actual ride, we were sent winding back and forth a dozen times, only to find out that we were not even close. The one positive thing Universal does for “waiters,” (in this line anyway) is they have large fans set up high above, blowing air on the hundreds of people that are sweating profusely….while waiting in line.  (Disney executives; buy some fans!)

As if waiting in that line wasn’t bad enough, once we got inside the air-conditioned castle, the people that had bags..purses etc. were led to a locker area. This area had your typical old castle lighting; none-to-dim.  About 75 people all jockeyed for position to try to put their bags and purses into some very tiny lockers. (No loose items were allowed on the ride.) This was crazy. Of course all the lockers were taken, so we asked the one employee what we should do. She said that all the lockers were in use. Dah. And?  And…nothing. She didn’t tell us what to do next. What a stupid set-up. Utter chaos. Consultants needed.

Everyone who works for a franchisor…heck, every franchisor, needs to take a couple of days off, and go to these two Orlando, Florida parks. They’re like night and day.

Doing as I suggest will do one of two things for you;

So, have you ever been to Disney World? Were you impressed?

Have you visited Universal Studios? Did you have a better experience than ours?

Do you already have what you feel is an amazing franchise concept? Share it with us.

One more thing; are you a multi-unit franchisor? If so, do your franchisees have their own local websites?