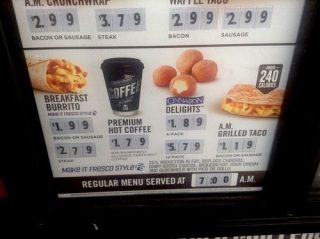 In my younger days, breakfast sometimes consisted of whatever was within reach. As long as it wasn’t moldy, it was fair game. Now, not so much.

If a car was within reach, and I had a few dollars in my pocket, an 11:00 AM McDonald’s hamburger was fine. Fries-sure. No prob.

But, a Taco Bell Breakfast Burrito?

If Taco Bell had been serving breakfast (like they are now) I’m not sure if I would have been a frequent flyer there.

I don’t think Taco Bell has a poor product-not at all. It’s just the idea of having breakfast there, I guess.

Would You Go To Taco Bell For Breakfast?

The fast food sector-especially in franchising, is super-competitive. To compete, franchisors need to (sometimes) get out of their comfort zones. In Taco Bell‘s case, in a big way.

Do you think it’s a risky move? After all, McDonald’s wasn’t known for serving breakfast until they did.

It’s just that the idea of a large, spicy burrito-for breakfast…well, it doesn’t create hunger pangs in this King’s abdomen. Maybe it’s an age thing.

I give YUM! Brands credit for creating a clever-and great, ad campaign.

I’ll bet that ad really upset the folks at McDonald’s corporate headquarters. As a matter of fact, McDonald’s CEO called Taco Bell a “taco shop,” and according to this story from Eater National, didn’t seem to worried about the new breakfast competition.

I can’t think of a sector of franchising that’s more competitive than the fast food sector.

According to Franchise Direct, it costs over $1 million to open one free-standing traditional Taco Bell restaurant.

And, what is a free-standing Taco Bell restaurant?

“Free-standing, permanent buildings of various sizes and configurations that offer the full Taco Bell menu. The buildings include a kitchen facility where food is prepared and assembled, a counter where orders are placed and paid for and food is delivered, tables and seats for customers and, frequently, an automobile drive thru.”

And, check out these 7 silly things about Taco Bell.

So, are you going to try breakfast at your local Taco Bell?