You are here: Home / books / Doing Business In A Small Town When I think of small towns, many different visuals pop into my head. Such as;

I also think of my own time spent living in small towns.

The first one was Independence, Iowa. My first job in radio broadcasting led me to this farm town. With a population of 3,000 or so, it was truly a rocking town. (Well, it was for the farmers who harvested acres and acres of the best corn around!) I remember a few of the businesses there; K-Bob’s Steak House was one of them, and it’s where Thanksgiving dinner took place while I lived in Iowa. I don’t remember seeing any franchise businesses there, but there may have been.

The second small town I lived in was Andrews, Texas-also part of my days as a radio announcer. Located in what’s known as the Permian Basin, the economy in Andrews revolved around oil. I worked at the only rock station in the area, and my show, “The JL Night Bash” was on the air 6 days a week from 7-midnight. I had an absolute blast there. And, there were a couple of franchise businesses there.

One of our top advertisers was the local Sonic Drive-In, which is still there after 30 years.

The things I saw while living in these two small towns are mentioned in Small Town Rules: The Book 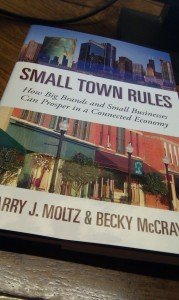 Becky McCray and Barry Moltz co-authored this terrific new book, and they sent me a review copy. (They’re both friends of mine-we met at Blogworld a few years ago.)

I just finished the book, and I learned several things….

1. Save money for a rainy day

Small towns-especially ones that are farming communities, can’t control what does or doesn’t come out the the sky. It’s all about the weather, and farmers have to have a lot of funds put away for when things don’t go their way. It’s what their parents and grandparents did, so it’s what they do.

Small town business owners are networkers. Lots of them belong to their local Rotary clubs, Kiwanis clubs, and of course, their hometown chambers of commerce. And, they proudly display signs stating that they are members of these organizations in their businesses.

3. Doing whatever it takes

Becky, who lives in a small Oklahoma town, shares a story in the book about some lean times she experienced while growing up. Her parents owned a trucking company, and during an especially tough year, (when their trucks weren’t being used much) they ended up chopping some wood, which they then sold to stores in town-to make ends meet.

There are several important lessons included in their book. Most of them have to do with business. But, some of them are a little deeper than that.

If you’re a small business owner, (any size business) you should read this book.

There’s a lot more to it than the title suggests.