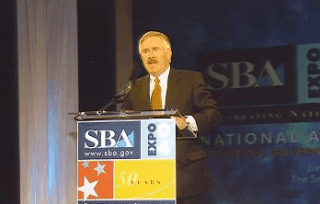 Please join me in congratulating Jim Blasingame, for 15 years of  The Small Business Advocate®, a business radio program he created and launched on November 17, 1997. Since then, Jim has been the only syndicated host talking to America’s entrepreneurs on live radio every weekday, as well as to a global audience since his pioneering Internet simulcast began in January 1998.

I’m grateful for the opportunity that Jim and his team presented to me back in 2006. They contacted me because they wanted to add a franchise professional to the Brain Trust®, and I’ve been getting interviewed several times a year ever since then.

And, The Small Business Advocate radio program is where I launched my hardcover franchise book on December 5th, 2011.

Internationally recognized as “The Voice of Small Business,” Jim Blasingame conducts more than 1,000 live interviews annually with his Brain Trust®, the world’s largest community of small business experts, now more than 1,500 strong. From these interviews, more than 2,700 podcasts are produced annually.

If you’re up and around tomorrow morning, (Monday, November 19th) Jim is interviewing me at 7:00 AM eastern time. We’ll be digging into The Top 10 Ways That Potential Franchise Owners Can Lower Their Risk.

Go here for the radio program.

Of course, you can always download the podcast at a later date.