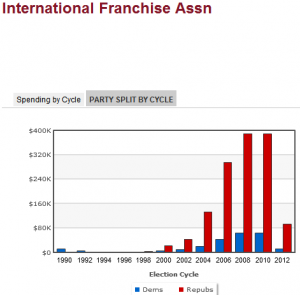 The chart above is courtesy of  OpenSecrets.org. Their tagline;

“Help us shine a light on the money in politics.”

There should be no doubt in your mind on which side of the aisle the largest and most powerful franchise association, (and it’s members) tend to congregate. Not only do they spend lots of time on the Right, it’s pretty obvious to me where most of their good ole boy networking happens, too.  (With checkbooks in tow, I would imagine.)

Is it wrong? I suppose it is if you’ve paid several thousands of dollars in membership dues, spend thousands more on travel/entertainment, but don’t vote Republican.

I’m curious; if you voted for President Obama…let’s even say that you enthusiastically voted for Obama, and always vote Democratic, are IFA gatherings uncomfortable to attend?

What if the situation was reversed? If you always voted Republican, and the IFA leaned Left, and threw their money towards the Democrats, would you feel out of place? Would you feel uncomfortable?

My reason for writing this post has less to do with party affiliations than it has to do with principles. (I think.) Think about it; one day you’re at home watching Wolf Blitzer extol the virtues of 2-3 Democratic Senators, and the next, you’re travelling to Orlando to attend the IFA Convention, and hear Bill O’Reilly speak about all things Republican.

If you believe in Democratic principles, how can you talk yourself into spending $2,500 to listen to Bill O’Reilly tell you that you’re an idiot?

Bill Clinton spoke a few years ago. If you voted Republican, didn’t you feel weird travelling to an IFA Convention to hear him tell you pretty much the same thing?

Does it matter? I’d like to hear your thoughts on this topic.