You are here: Home / be the boss / 3 Words That Will Put The Kibosh On Your Franchise Dream

These days, there are lots of things that can put the kibosh on your dream of owning a franchise.

In this franchise blog post, I’m going to go over one of them.

Need A Loan For A Franchise?

90% of the people I work with end up getting a small business loan for their franchise business startup. You probably will too.

But you won’t be able to get your business loan approved unless you have something that’s very, very important.

That’s right; as strange as it sounds, you’re going to need money of your own in order to get money that you can borrow.


To put it another way, there is no such thing as a “Zero Down Loan.”

Those are the 3 words that will put the kibosh on your franchise dream. Your dream of saying goodbye to your boss so you can be the boss.

Back When Newspapers Were Around

“What does that have to do with “Zero Down Loans,” Joel?

You’ll see in this excerpt from my book* – “Become A Franchise Owner!”

From Chapter 11, “Loans, Legalities And Luggage”

Years ago, I advertised my franchise services in the classified section of Cleveland’s only newspaper, The Plain Dealer. I would usually get one to two calls a week from local area residents who were interested in learning about franchise ownership. Half of the folks who called seemed to be more interested in finding out how to get the money to buy a franchise, and didn’t really understand how small business loans work.

For instance, when I inquired about how much of their own money they would be willing to use, some of these folks would tell me that they didn’t have any money to use towards a business; that’s why they needed a loan. I would gently share with them that in order to get a loan, the banks would need them to put a portion of their own money in, too. After about ten seconds of complete silence from the other end of the line, I would ask them if they knew anyone that could loan them money for a business. The answer was almost always no; so I would thank them for contacting me, and tell them to call me if anything changed. Sometimes, as I was moving the phone away from my ear to hang it up, one more question was asked of me, and it bears mentioning in this chapter;

“Aren’t their government grants available for people who want to start a business?”

My answer was always the same; “I’m not really sure, but I’ve never met anyone who used one to start a business. Let me know if you find one.”

That was my way of saying that there’s pretty much no way in heck that you’re ever going to get any type of government grant to start a franchise business. Now, maybe you’re saying to yourself, “Joel….dude, you’re being so negative. You’re so harsh. How do you know? Maybe there are grants out there to start a business.”

You can forget about grants.

Because you don’t have enough money to buy most franchises.

*Did you know that you can get my franchise book AND two Private 1-hour consultations when you invest in The Franchise Success Kit. 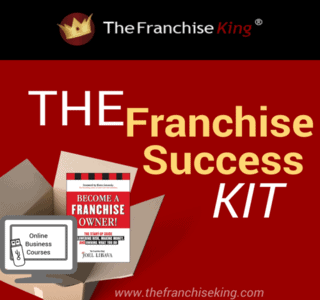