You are here: Home / Coaching Franchises / Franchise PR Lesson; How To Ruin Your Less Than Stellar Reputation Even More

A recent press release announcing a “$7.6 million Franchise Giveaway” by ActionCoach, formerly known as Action International, is causing me to have major neck pain.

I mean it; whenever I get really stressed-out over something….really angry…the muscles located in the back of my neck do the herky-jerky.  (As I write this, my wife is being kind enough to bring my Shiatsu Turbo-Massage thingy up to my nicely-equipped home office. ) Thanks, Jeannine! 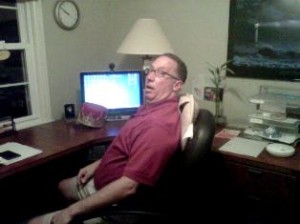 So, I’m reading this press release, and the first thought I had was; how dare they…

How can this franchisor, (in good conscience) announce this?

“ActionCOACH, the world’s number one business and executive coaching company, has launched a program that will provide business opportunities to 100 military veterans, through its Free Franchise for the Forces program, which will give away $7.6 million in free franchises to 100 eligible veterans in select U.S. states.”

That’s because, for the most part, military veterans, especially the ones who will be soon coming back home from dreamy places like the Iraqi desert, and the ultra-modern tribal communities of Afghanistan, will have;

B. No executive-level sales skills

ActionInternational is taking care of the $70,000+ in start-up costs, and that’s great, but I just don’t see these folks as executive business coaches. They may inquire about these “free franchises,” but they won’t get very far through the franchise buying process.

The franchise information area of  the ActionCoach website describes what they’re looking for in a franchisee;

“A Practice is a ‘single coach’ business model that offers both a solid business and a great work-from-home lifestyle with a lower overhead and stress level. It provides an opportunity for those with an executive leadership or business ownership background to directly transfer the skills they have developed over their careers into a business opportunity where the value they provide to their clients is amplified by the ActionCOACH Tools and Systems.”

Did you read the part about “executive leadership?” Or, a “business ownership background?”

Now, in case you don’t know, a coaching franchise is an executive-level franchise model that requires a serious amount of sales skills; you can’t be a coach unless you have someone to coach. You have to find your own clients! Read All About Coaching Franchises

Because, I’m sure that Brad Sugars (The big boss of ActionCoach) would never want to award franchises to the wrong people. 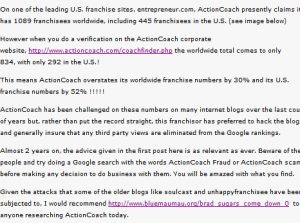 The thing that’s really requiring me to have an electric Shiatsu massage at this juncture is not that fact that some veterans may be awarded franchises that they have no chance in heck of succeeding in; it’s the fact that the executives at ActionCoach have seemingly made a conscious decision to use the men and women who make it possible for ActionCoach and franchises like them to even have the right in the first place to offer their franchises all over the US (the land of the free) for some cheap PR.

These guys will never give away 100 franchises to veterans. That’s because almost all military veterans aren’t usually the right fit for a coaching franchise. And how do I know, you ask?

I’ve worked with lots of veterans over the years in an advisory role, and have even helped some of them get into franchising. I can’t remember one time in which a consulting/sales franchise was ever on my list of ideas to present to them.

Ask anybody in the franchise industry about veterans. Ask them what types of franchises they usually go for, and tend to be a fit for.

Let me know what you hear.

Anyway, the ActionCoach Franchise Giveaway made for a nice press release. Kudos to them for that.

Do you agree with me on this? Or, am I living in Shiatsu Land?

Do you have a plan, franchise buyers?

Wait! Please Share This Before You Go!
1Shares
Note: When you buy through links on our site, we may earn an affiliate commission.