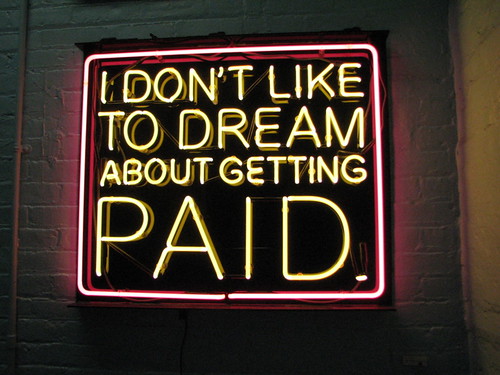 You’ve been waiting for this moment. You’ve been dreaming about being your own boss for years. Congratulations!

Finally, you’re in charge of your own destiny. No more idiotic bosses to deal with. No more corporate games. Office politics; Gone!

You’ve made the conscious choice to become a franchise owner!

And, you want to make some money. Of course, you did awesome franchise research, so you know that you won’t be getting a paycheck right away.

That’s because if you’re looking at becoming the owner of a start-up franchise, (not a franchise business that’s already up and running) here’s the deal;

You won’t have a salary coming in during the beginning stages of your new business.

Are you comfortable with that?

Think about it; where would your salary come from? You’ve just invested some of your own money into a brand-new business, got a small business loan to cover the balance of the total franchise costs, and until you open for business, you have no customers. Knowing that up-front, you’ve set aside some money to live on.

Can you afford to not have a salary coming in for a while?

Here’s another thing to think about, and hardly anyone I’ve worked with does:


Your Website Could Be Making You Money Learn More

Are you prepared psychologically? Will you be able to handle working 60-hour weeks making no money? (For a while)

Please read that sentence again; it’s an important one.

It’s easy to “say” you can do this…work really, really, hard with not much to show for it. It’s another thing to live it. To do  it.

Before you jump into a non-traditional career, you need to know things like what I’ve just mentioned. That’s if you really want to lower your risk, make money, and own what you do.

Here are a few more thing that you need to know, (before you take that checkbook out) that I shared in this post at SBA.gov.

I’m focused on creating a new breed of super-successful franchisees.

“When seeking advice and information about investing in a franchise you need someone who is knowledgeable; who is honest and straight with you; and, most importantly, who CARES. Joel Libava is a rarity as he has all of these qualities. Franchising is about family and friendship as much as it is about business and making money; Joel knows this, and with candor and enthusiasm, he will guide you to ask the right questions and get the information you need to make the best decision for you.”
– Lizette Pirtle, CEO, Expansion Experts