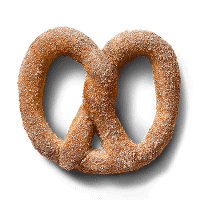 I’m a Cinnamon Sugar pretzel kind of guy…especially when I’m at an airport between flights, or at my local mall. What’s your Auntie Anne’s® franchise favorite soft pretzel flavor? Seriously; I want to know.

Auntie Anne’s®, the world’s largest soft pretzel franchise, is named after founder, Anne Beiler. Anne was born in the heart of Amish country, Lancaster County, Pennsylvania. Anne was raised Amish, and there were 7 other children in her family. She was put in charge of baking and bread making. When she got older, she was able to work in a restaurant as a waitress; she also worked at a food stand at the local farmer’s market.

That was where she learned how to bake pretzels. She did so Pennsylvania Dutch style; soft and doughy.

In 1987, Anne started making soft pretzels at a stand in Maryland. That proved pretty successful, so she decided to take a risk (a true entrepreneur) and she rented a stand in Downingtown, Pennsylvania a few months later. She called it Auntie Anne’s Pretzels.

I need to stop for a moment to share something really important about Anne:

Anne had no previous business experience…none at all. And, she only had a ninth grade education. Those two things didn’t stop this very strong-willed young lady. She managed to open 8 stand-alone stores, and after only a year, she opened her first Auntie Anne’s Soft Pretzels store in a mall. By 1989, Anne had opened her first franchise outlet.

Auntie Anne’s® has more than 1,800 stores up and running, and the company just experienced its 25th year of overall sales growth in 2013. If you’re interested in owning a franchise in the food business that’s on the move, Auntie Anne’s® is worth a look. 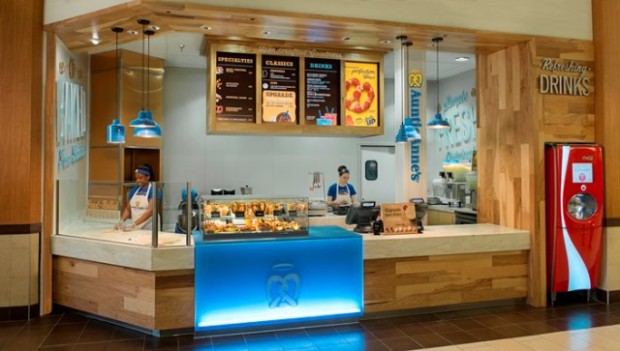 
Where Are Auntie Anne’s® Franchises Located?

One great thing about Auntie Anne’s® is that their stores can be found in all sorts of places. You can find them in:

As you can see, Auntie Anne’s® provides several different venues for their franchisees to open up their stores. Maybe there’s one…or two,  in your  franchise future.

Now that you know the history behind this iconic franchise brand, and the types of locations their stores can be found in, let’s dig into the franchise opportunity.

There are three types of Auntie Anne’s setups:

2. Pretzel Kiosk– a franchise unit with a smaller footprint than a typical retail store

3. Satellite Retail Unit– also a unit with a smaller footprint, with the baking done at the main franchise location

As you can see, with an Auntie Anne’s® franchise, you have lots of choices. The total investment for an Auntie Anne’s franchise ranges from $146,050 – $523,500…depending on the location and store type.

Most franchisors have a few key markets they’re trying to enter, and Auntie® Anne’s franchise is no exception. If you live in these cities, the franchise development teamreally wants to talk with you:

What do their franchisees think about the company?

“Throughout my time with Auntie Anne’s, I’ve appreciated the fact that with any questions we may have, there is always someone to help you, whether in person or over the phone, they are there to help you achieve a result that will only help you succeed.”

(From an Entrepreneur.com story about Auntie Anne’s®)

Here’s what another one Auntie Anne’s® franchisee, Bret Stewart, says about the company he partnered with:

For more information on becoming an Auntie Anne’s® franchise owner, go to their franchise website.

While you’re doing that, I’m going to drive my chariot over to my nearest Auntie Anne’s® store so I can get my Cinnamon Pretzel fix for the week.

Please Share This Article!
125Shares
Note: When you buy through links on our site, we may earn an affiliate commission.