She should have left her pen in her pastoral purse.

Instead, Alois Bell, a learned St. Louis Pastor, added this to her Applebee’s restaurant check: 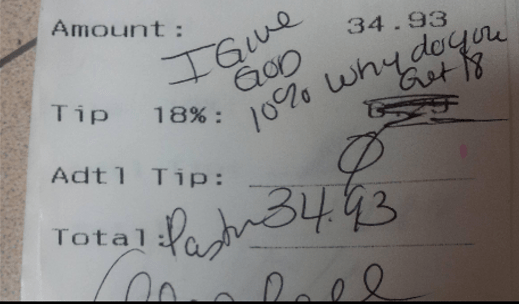 That showed some class, huh?

I Was In The Restaurant Business

Although I never worked for Applebee’s, I do have real-life experience as a server, Maitre’d, and manager in the food-service business. I also know a few things about franchise social media.

First off, that pastor never should have never penned that insult to her server. As a former server, (who made $2.01 an hour + tips) I can tell you that if I had received a note like that, it would have messed me up for at least that day. It’s really insulting.

Now, I worked in the restaurant business pre-social-media. (If I told you that cell phones at the time weighed 3 pounds or more, you could probably guess when I was in the business.)

Regardless, I would have shown the note to my manager, and he or she would have had a little chat with Ms. Bell. (Maybe)

I read a great post that my friend, Laura Petrolino shared with me.

It was written by R.L. Stollar, who’s is an investigative writer at the Eugene Daily News.

He wrote the following:

“Applebee’s fired the waitress in question, named Chelsea Welch. This created a fury of rage on the Internet, with social media users taking to their weapons of choice and lambasting away, thousands at a time, against the restaurant’s decisions. Numerous ‘Boycott Applebee’s’ groups sprung up on Facebook, along with ‘Rehire Chelsea Welch’ and other similar groups. Applebee’s website has a “’What’s the Buzz’ widget, that shows what people are saying on Twitter about the company. It’s been non-stop attacks, all publicly displayed on Applebee’s own page.”

In his post, Stollar goes through the Applebee’s social media timeline, which strangely enough seemed to have most of it’s activity 3:00 AM.

That’s not how to do social media, people.

I’d like to gently suggest that the social media team at this Applebee’s franchise location read “The Top 10 Tips For Social Media Marketing.” (It was written by my good friend, Suzanne Vara.)

Use This Company For Franchise Social Media Marketing

It’s Not About The Pastor

The Pastor has apologized. Big whoop. If you were a server, would you want to serve her at a restaurant?

I actually hope that she get’s refused service by servers who recognize her. 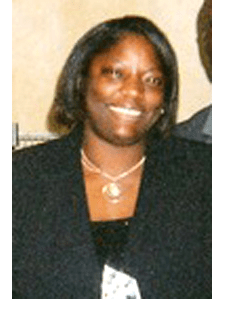 Do you think I’m being a jerk?

You wouldn’t, if your current or previous career included being a server.

I know that I would refuse to serve her.

This entire debacle-the stupid, classless note, and Applebee’s social media #fail is really about the server who was fired.

It’s actually about every server who gets paid a shit wage, and has to rely on the whims of customers for his or her income.

Lots of customers are cheap…they leave a 10% tip, and think that it’s okay. Some customers actually don’t even know what the customary tip is for a waiter or waitress. (It’s 15% of the amount of the check, before taxes.)

No Tip From This NBA Player

One more thing: I still know a lot of people in the restaurant business. One of my friends shared this with me, and it wasn’t the first time I had heard of it.

“When (insert the name of an ex-Cleveland basketball player who’s 6″8 and rich-beyond belief) comes in to our restaurant, he never leaves a tip. Instead, he signs the tablecloth.”

When I was in the business, I took care of several celebrities and corporate big-wigs. Here’s how they tipped:

There are a few more, but you get the point.

Are you a server? Tell me, what would you have done? Would you like to share some tipping stories?

The comment section below would be the perfect place to do it.

*Image courtesy of Applebee’s Woodbury Common by goodiesfirst, on Flickr