You are here: Home / Franchise Advisor / What Is a Franchise Ownership Advisor? 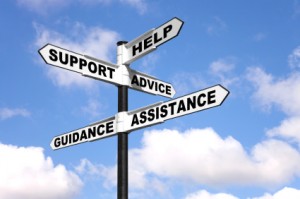 If you’re in the hunt for a franchise, you’re going to run into all sorts of, franchise “experts,” franchise consultants, and franchise brokers; even if you don’t want to. And, it’s only because you’ve put yourself out there-you’re shopping online for franchise business opportunities.

You may even find yourself getting aggravated by all of the emails and phone calls that you’ll be receiving from franchise brokers and franchise consultants. Don’t fret. Here’s what I want you to do if you start getting angry; take a deep breath, and remember why you’re thinking about going down this path. After all, the franchise model is probably the greatest business model that the world has ever seen. Plus, it’s usually better to not do big things like this alone. In franchising, you’re not alone.

I’ll start off by telling you what franchise ownership advisors aren’t, and then I’ll lead you right into what they are. Fair enough?

Before I go on, I want to make sure that you know what brokers, consultants, and franchise salespeople do.

Franchise Consultants– There are two types of franchise consultants. The first type consults with people that are interested in turning their independent businesses into the next great franchise. You won’t run into any consultants like that during your search. The second type of consultant is a franchise broker in a consultant’s uniform. Same exact thing. Different name. A bit more uppity. (I used to be one.)

Franchise Ownership Advisors Do This

Franchise Ownership Advisors are advisors. They’re guides. They’re coaches. They work with potential franchise owners that are in various stages of their franchise exploration.

They aren’t matchmakers. They don’t sell franchises. They’re not paid commissions to match you up to franchises that they have contracts with. The franchise companies are not their clients. 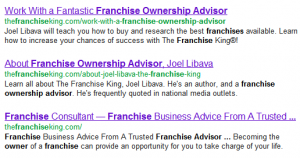 I created my own business model. My own category. A little more than a year ago, I decided that I didn’t want to compete in a space that was being overrun by amateurs.

When I first joined my Dad in 2001, there were only a handful of people doing what we were doing. (Brokering) My Dad was actually among the first.  I enjoyed my work. A lot. But, nothing stays the same, and I left the franchise brokerage franchise I was with to go out on my own in 2007.

As I said, I just didn’t want to compete with thousands of brokers and consultants-most of whom aren’t even around anymore. And, something changed inside of me. I’m not sure if it had anything to do with the franchise brokerage franchise that I was becoming increasingly resentful of because of some of their internal tactics, or if it was because of the way that the franchise industry was changing. Whatever the reason, I decided to focus on teaching and coaching. I wanted the people that were putting their money on the line to be my clients. I wanted to protect them. And, I still do. It’s my focus. I’m on a mission, and if you’re looking at franchises, I can help help you figure things out.

“Joel Libava doesn’t just fork out lame general information about becoming a franchiser he guides you to maximize your strengths when you enter this adventure. If you plan to become a franchise owner, don’t be foolish, listen to Joel and read his book.” – John Falchetto, Life Coach

Here’s how I can guide you through your franchise discovery, research, and purchasing process;

Those are just a few of the things that I do for my clients. There’s a lot more. And, it doesn’t cost you anything at first. You can even ask me franchise questions for free.

“My wife and I are interested in starting a business so we visited a franchise expo. Afterwards, we were contacted by a couple of franchisors and we soon found ourselves deeply immersed in researching these two particular franchises. We needed to take a step back and take stock of the bigger picture: Is a franchise right for us? Right now? What type of businesses would suit us? We needed an independent and knowledgeable perspective. An hour chat with Joel clarified some of our thinking and gave us some useful ideas to pursue.“ – Steve and Marci Nemburg, Toronto

We can speak on the phone, or on Skype for a few minutes-no charge

If you like what you hear….if you like my style, and feel that working with me could help you lower your financial risk, and increase your chances of success, I offer a few different programs that can be custom-tailored for you, no matter what part of the franchise buying process you’re in.

If you don’t want to do this alone, let’s talk. I can help you figure this franchise thing out. You’ll be my client.