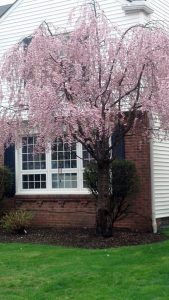 Our Weeping Cherry Tree has never blossomed like this.

Maybe it has to do with the soil conditions.

Or lower than normal spring temperatures.

Our tree was planted 13 years ago.

It’s bigger than it was back then.

And, it has blossomed somewhat every spring. 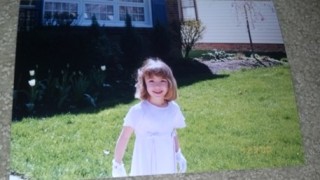 (Our Weeping Cherry in 2000. It’s to the right, behind The Franchise Princess)

Maybe It Became Too Painful

“There came a time when the risk to remain tight in the bud was more painful than the risk it took to blossom.” -Anais Nin

Maybe our tree had enough, and decided this year…to blossom like never before.

If not, maybe you need to be in more pain.

Maybe you have to get downsized one or two more times.

Unless you’re one of those that believe that corporations actually care enough about their employees to do whatever it takes to keep them employed.

I’ve worked with a lot of people interested in franchise ownership that have been bursting at the seams.

But, everyone that I’ve worked with had one thing in common:

They were ready to take control of their lives.

They were ready to stop being in so much pain.

They felt that they were ready to blossom.